A data story is the successful combination of data, narrative and visuals. By using them, we can create powerful stories that influence our listeners. 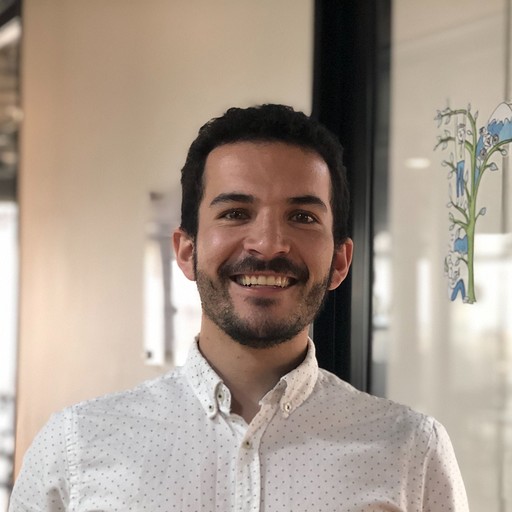 The year is 1846 and Ignaz Semmelweis, the main character of this story, has just been appointed a position comparable to “chief resident” today at a large maternity hospital in Vienna.

The hospital had two maternity clinics, and the main difference was the staff. The first clinic was the teaching service for medical students while the second clinic was for midwives only.

This troubled Semmelweis deeply, because it was common knowledge that the first clinic with the teaching service for medical students had an average maternal mortality rate of 10% due to what is commonly known as “childbed fever”, while the second clinic of midwives only, averaged less than 4%.

Semmelweis later stated that women begged on their knees not to be admitted to the first clinic and sometimes even preferred to give birth in the streets. Semmelweis went on to analyze a wide range of potential causes like overcrowding, climate, technique, and even religious practices but could not find any factors that could reasonably explain the lower mortality rate in the other clinic.

Everything changed when a close mentor and friend, Jakob Kolletschka, died after having been accidentally poked by a student’s scalpel during an autopsy. Kolletschka showed similar symptoms to the women dying of childbed fever. It was common practice for doctors and medical students to perform autopsies in the morning and attend maternity patients for the rest of the day without properly disinfecting their hands. Midwives didn’t have any contact with corpses, so Semmelweis developed a hypothesis thinking that some poisonous particle was being transferred between the corpses and the maternity patients. 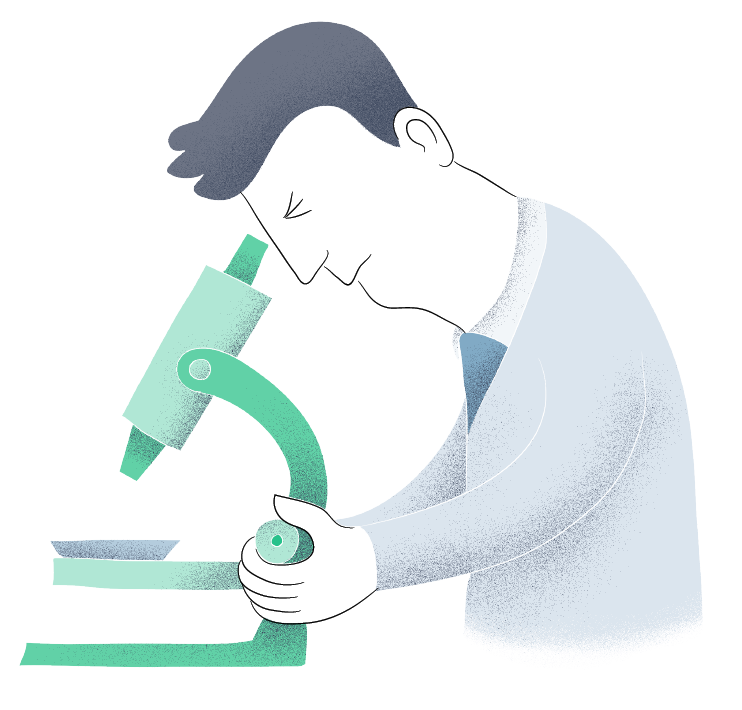 He designed an experiment using a chlorinated lime solution and introduced a new handwashing policy. At that time the mortality rate went from 12.2% to 2.2%. After a few months, he discovered that some doctors were not following the new policy. He introduced stricter control and managed to reduce the mortality even more, including two months with no mothers dying due to childbed fever. He thought the facts would speak for themselves, but the medical community of his time criticized, ridiculed, and resisted his ideas. More importantly, most doctors were not willing to accept that it was their fault mothers were dying.

In the end, Semmelweis was not able to renew his position at the hospital and was blocked from obtaining similar positions. He kept writing letters and books for the rest of his life trying to convince the medical community, but his ideas were openly mocked and criticized. In 1865 he ended up in a mental institution due to a mental breakdown and died two weeks later to an infected wound.

Thinking, Fast and Slow and the information deficit model

Many of us live by the information deficit model. We think that people simply need the right information to make the right decision. For decades psychologists and economists assumed that people only made rational decisions based on maximization of utility.

Daniel Kahneman and Amos Tversky explained that, contrary to common belief, we actually often use heuristics to make decisions when they presented the concept of behavioral economics in the 1960s.

In 2011, Kahneman published the book Thinking, Fast and Slow, explaining that the human mind has two subsystems. System 1 is fast, intuitive, emotional, automatic and subconscious. System 2 is slow, analytical, logical, effortful, and conscious.

We usually consider system 2 to be in control, but it is more of a lazy controller. It only jumps in when absolutely necessary. Daniel Kahneman has even gone so far to state that we keep using System 1 even after we have been trained to use System 2.

“Our research doesn’t say that decision makers can’t be rational or won’t be rational. It says that even people who are explicitly trained to bring System 2 thinking to problems don’t do so, even when they know they should”.

This can be hard to admit because we like to see ourselves as rational beings, but emotions play a very important role in the majority of our decisions.

The importance of connecting emotionally to drive change

Multiple experts have written books regarding the importance of emotions in the decision-making process so we will only go through one example and focus our efforts on how to respond to this information.

Semmelweis made several mistakes when presenting his findings to the medical community of his time. For example, he presented the data using only plain and boring tables instead of using graphs that could engage his audience. More importantly, he underestimated the emotional consequences of his findings.

Accepting that lives could be saved by something as simple as handwashing was equivalent to admitting that the thousands of deaths occurring all over Europe due to childbed fever had been the doctors’ fault and their lack of hygiene. 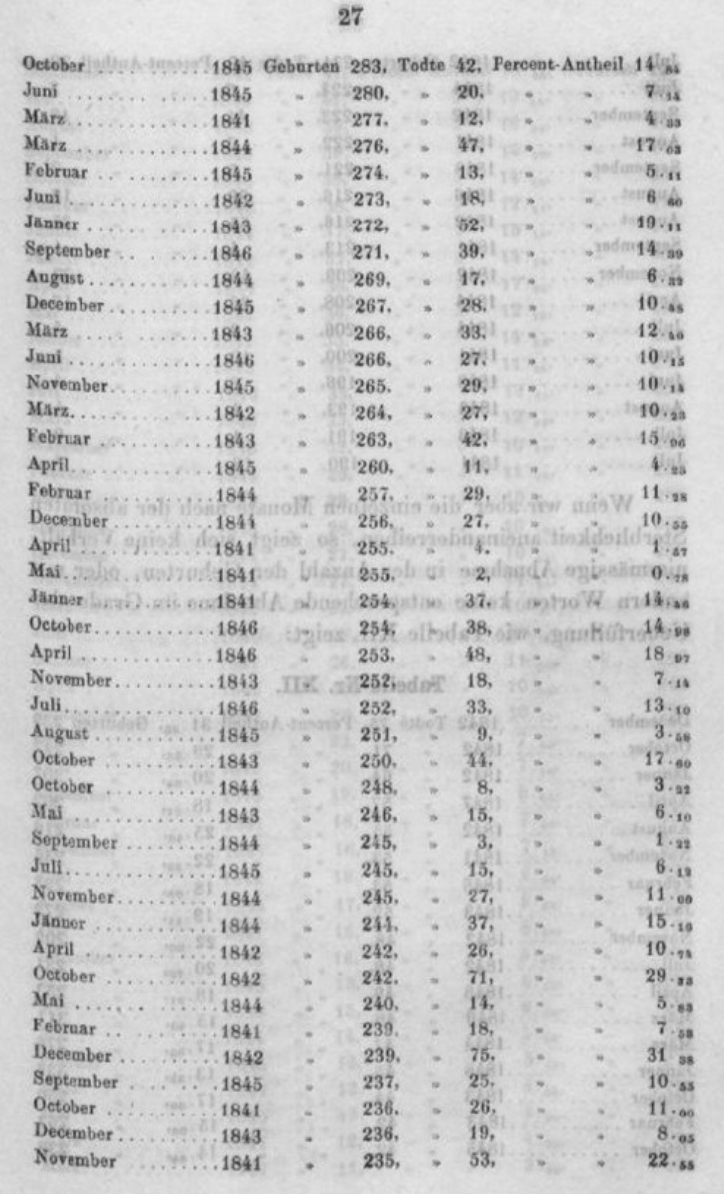 It is extremely difficult to overcome the feeling of guilt with facts alone. To do this we need to use a tool that has the same emotional power or even more. Connecting emotionally with someone makes it easier to capture their interest and there is a higher possibility for displacing any conflicting emotions that can block our idea or proposal.

Unfortunately, we can’t do that with just ideas and facts, so we propose the usage of data stories.

The power of data stories

A data story is the successful combination of data, narrative and visuals.

Data is the foundation of the data story and is what differentiates it from other types of stories. They might have facts scattered throughout them or might have been inspired by facts, but only data stories are derived entirely from data. The quality and trustworthiness of the data will determine how credible and powerful the data story is.

The addition of narrative is what makes it possible for a data story to connect with the audience at an emotional level. The reason for this is the effect stories have on the brain.

Interestingly, when we hear facts only the regions used to process language light up in a brain scan while stories also activate regions of the brain associated with touch, smell, and movement.

According to Brent Dykes, author of Effective Data Storytelling, we hear statistics, but we feel stories. To leverage this fact, Dykes developed a four-stage narrative structure called the Data Storytelling Arc:

The setting presents the background of a current situation and usually finishes with a hook or a “hmm moment”. This is a notable observation that begins to reveal a problem. The setting is followed by a series of rising insights, facts that start to reveal the main idea of the data story.

The climax of the Data Storytelling Arc is the “Aha moment”. This corresponds to the major insight or finding we want to share. All of this has to be followed by a proposed solution or proposed next steps to drive the audience to action.

It is no coincidence that this data storytelling arc follows a similar format as other types of stories. This proven method has captivated audiences for thousands of years. However, researchers are still discovering the effects of stories on the brain. We already mentioned that stories engage parts of the brain that are not activated by facts alone. What is more interesting is that neuroscientists have discovered a phenomenon called neural coupling.

A person sharing a story and the audience listening to the story end up showing very similar brain activity even if one is producing the story and others are consuming it. In other words, it seems like our brains synchronize when we hear stories. Using different experiments, they found that the stronger the coupling, the better the understanding of the audience.

This means that stories essentially become the foundation for building shared understanding.

The final component of data stories is the usage of visuals. Our brains have been designed to rely heavily on visual information. We pick up information much faster when it is presented to us so that we can directly see patterns or anomalies in the data.

Let’s try converting the data collected by Semmelweis into a graph. We showed an example earlier of the data tables he used to share his insights with the medical community. This format makes it very difficult to compare data points and find deeper meaning in the numbers.

Here we see death rates of two very similar maternity hospitals at the time. One is the Dublin Maternity Hospital (blue) and the other line corresponds to the Vienna Maternity Hospital (red). We have also pointed out the moment in which pathological autopsies were introduced in Vienna and the year Semmelweis introduced the handwashing policy. 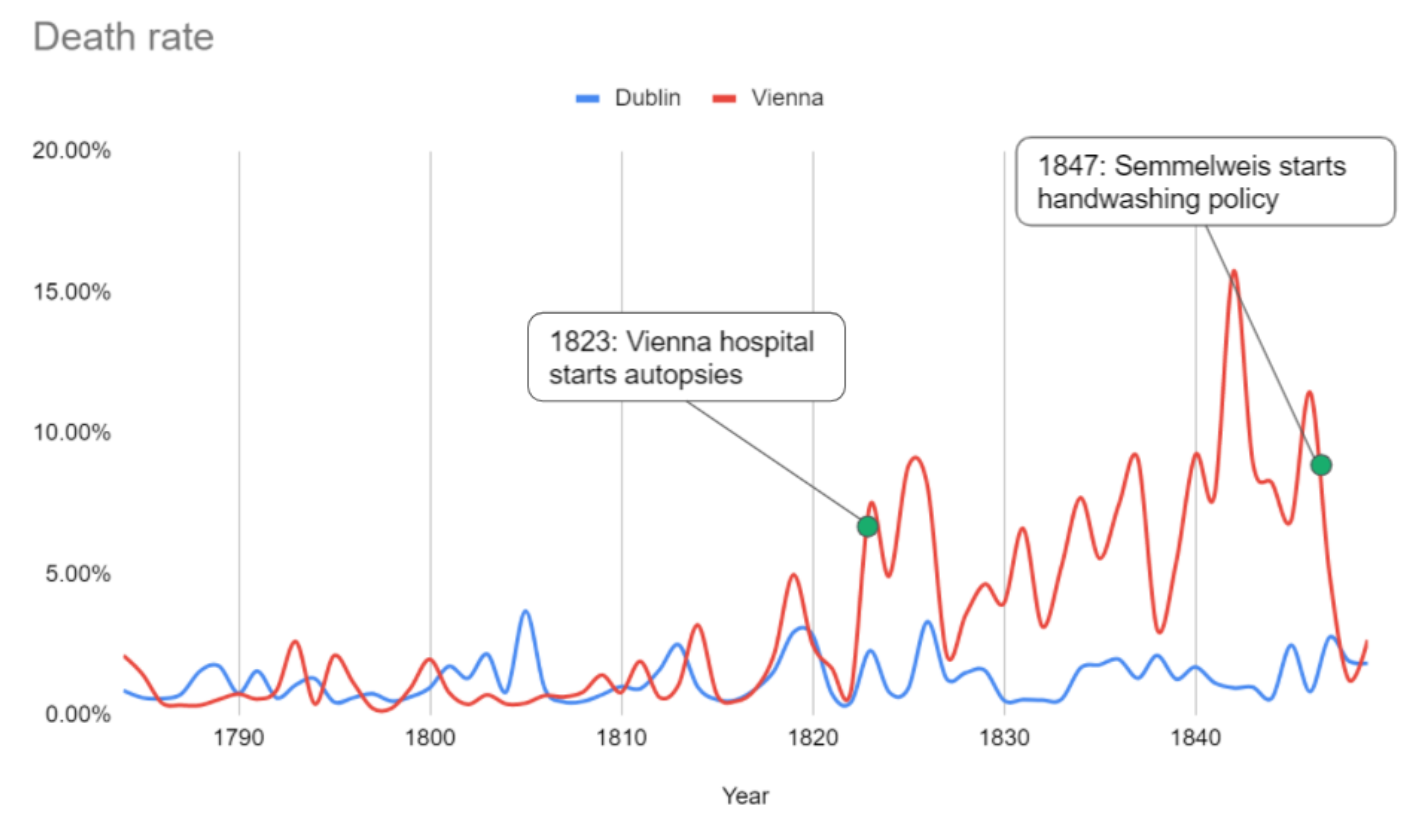 This might not be enough to prove that there were “poisonous particles” being transferred from corpses to patients, but the graph is very powerful as a rising insight. We can with little effort see that there could potentially be some truth behind Semmelweis’ hypothesis and at least be more open to the idea.

In his book, Brent Dykes also shares a Jewish folktale dating back to the eleventh century:

“Truth, naked and cold, had been turned away from every door in the village. Her nakedness frightened the people. When Parable found her, she was huddled in a corner, shivering and hungry. Taking pity on her, Parable gathered her up and took her home. There she dressed Truth in story, warmed her and sent her out again. Clothed in story, Truth knocked again at the villagers’ doors and was readily welcomed into the people’s houses. They invited her to eat at their table and warm herself by their fire.”

Billions of people have walked on this earth and it is impossible to count the number of business ideas that we have produced as humanity, and yet only a handful are remembered. These are the companies that are constantly moving forward; they connect with people at an emotional level, and in doing so create memorable stories.

Not so long ago, FocusVision commissioned Forrester Consulting to investigate the motivations underlying consumer decision-making. They discovered that “how a customer feels about the brand, their emotional connection with the brand, has a 1.5x greater impact on driving positive business outcomes than what they think. In short, emotions drive business results”.

Customers, leaders or coworkers, we are all people with thoughts and emotions. Don’t dismiss the power of emotions just because emotional decision-making is frowned upon. This is something we have to live with, so use it to generate value. We propose data stories because it extracts the value of a good story and combines it with solid and trustworthy facts. It is extremely difficult to ignore a good story.

Picture by Mick Haupt on Unsplash.